In 2012, I was made redundant for the first (and hopefully last) time. I was lucky enough to find temporary employment, however this wasn’t to last and the time was quickly approaching when I would need another paid job … so I also considered going self-employed. I had a little think and considered what else I could do – perhaps using my “transferable” skills, including social media – after all I was experienced in sales, IT, etc – and perhaps I could make a go of that instead. Sadly, I had no savings with which to fund my transition to self-employment – my redundancy package had been pitiful – so I meanwhile had to find permanent work. Anyway cutting the remaining story short, I stayed in this realm of employment and decided that self-employment wasn’t for me.

The business I’d planned on setting up was to have been called Cumbria Social Media, and I’d set up SM accounts in that name and was merrily using the @cumbsocmed Twitter account to follow & share accounts from Cumbrian businesses – for no other reason than I was interested in what other businesses had to say on their social media streams. I simply followed any accounts which looked like they were people based in Cumbria, and often they followed me back… Meanwhile I kept my personal tweeting to my own @pinkpebs account.

So – fastforward three years and I found myself with a Twitter account with an excellent “following” and all I used it for was to share stories, events and charity information I was interested in.  One day, a Tweeter I followed announced that they were curating the @PeopleofUK account – and upon investigation I found that I too could sign up to take part too. I decided to ask for the week I knew I’d be on holiday – I’d have lots of photos to share, lots to talk about – better than the boring sequence of work / home / TV / bed. So, a couple of weeks ago I curated the @PeopleofUK account while I went on holiday to the remote Ullapool area of Scotland (although sods law meant that there was very little mobile data signal apart from when we were back in the B&B)

I handed back the account on my return and although it had been strange seeing someone else’s timeline, I missed the novelty of having a different audience. I’d been using twitter more, having more interaction with people I didn’t know. Actually, it had made a interesting change. I had rediscovered my old enthusiasm for Twitter after not realising I’d become set in my ways.

I then  had a little brainwave and thought – what if I could share the @cumbsocmed* account? I changed the Twitter account name to @CumbrianPeople, (which by the way turned out to be easier than I expected) to reflect the structure of other ‘Rotating Curator’ or #RoCur accounts.

Would anyone else be interested in sharing their life in Cumbria? There’s roughly half a million people living in Cumbria, surely I can find people who would fancy giving this a go? Now, to ask the question …. Could it be you? 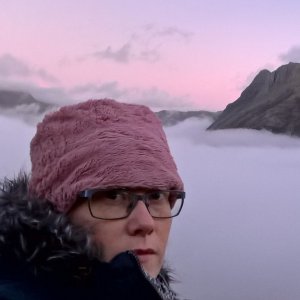